I’m coming to you all a little late with my recap of the Seahawks 5k, but better late than never right? I signed up for this race a few months ago thinking I would be more back to normal than I actually ended up being when I made it to the start line. I didn’t go into this race with high hopes or expectations of being able to run the entire race, since the injuries from my car accident have been really aggravated lately so I was just planning to take it easy and not push things too hard. Not really my idea of a great 5k experience, but you do what you’ve gotta do, right?

I had originally wanted to run the 12k that took place at the same time as the 5k because I actually really enjoy racing longer distances, but I’m glad I decided to play it safe and just sign up for the 5k instead. Next year, I will definitely be signing up for the 12k, since the course runs though the Seahawks training facility!

The race was sold out, so over 15,000 people were at the start line on race day sporting their best Seahawks gear. Even though there were a ton of people at the race, parking and packet pickup was painless for Jenica and I when we arrived around 7:30am. There were also a ton of different booths at the race including local radio stations, Nuun, Vita Coco and a ton of others that I can’t even remember, so we killed some time before the start of the race stretching and checking out some of the booths. 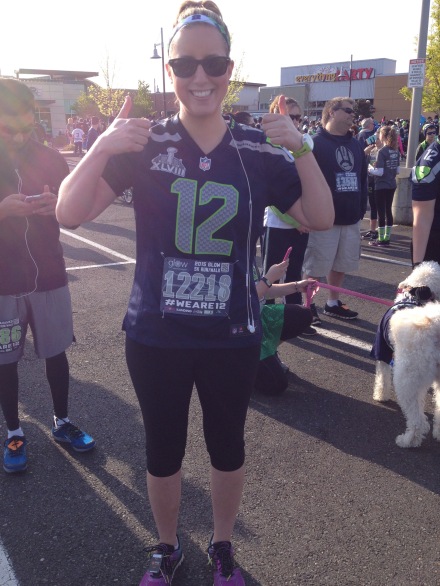 Jenica and I split up when the race started because she signed up for the 12k (which started 20 minutes before the 5k did). When it was time for me to line up, I was lucky enough to score a spot near the front of the first group that they let go through, which is always my preferred starting location. The 5k was a fast and flat course, so if you could manage to not get held up by all the kids running sporadically around and how crowded the race course was, this would have been a good race to try for a PR at.

I knew a few minutes after I started that this was going to be a rough race for me and I was going to have to take it easy and not push it too hard like I tend to do sometimes. I ended up making it through the first mile before I had to walk and ran for a short time once more before making it to the finish line. I had really been hoping to make it to at least 1.5 miles before having to walk, but I could feel my knee starting to give out and started getting a stabbing pain in my hip, so I knew it was time to walk. Thankfully, I’m back in physical therapy and already feeling a lot better after just one visit so I’m hoping that this time I will be able to get back to doing what I love again soon. Until then, I’m going to be stuck like glue to my new physical therapist and diligently doing my exercises because walking a race just doesn’t give me the same joy as running it does! 🙂

One thing that I thought was really cool about this race was that all participants received this Seahawks finishers’ medal! (You all know how much I love collecting race bling 🙂 One day I hope to add at least another half marathon medal to my collection!

After I made it through the chute, which took forever because of how little space they had allotted for it and how many people were at the event, I spent some time at the finish line watching the other runners come in while icing my knee. I really love watching peoples’ faces when they cross the finish line and sometimes it makes me tear up when the runner seems especially proud of what they just accomplished!

What is your next race on your calendar?